Retail Sales Coverage Reflected The Narrow View Of The Media 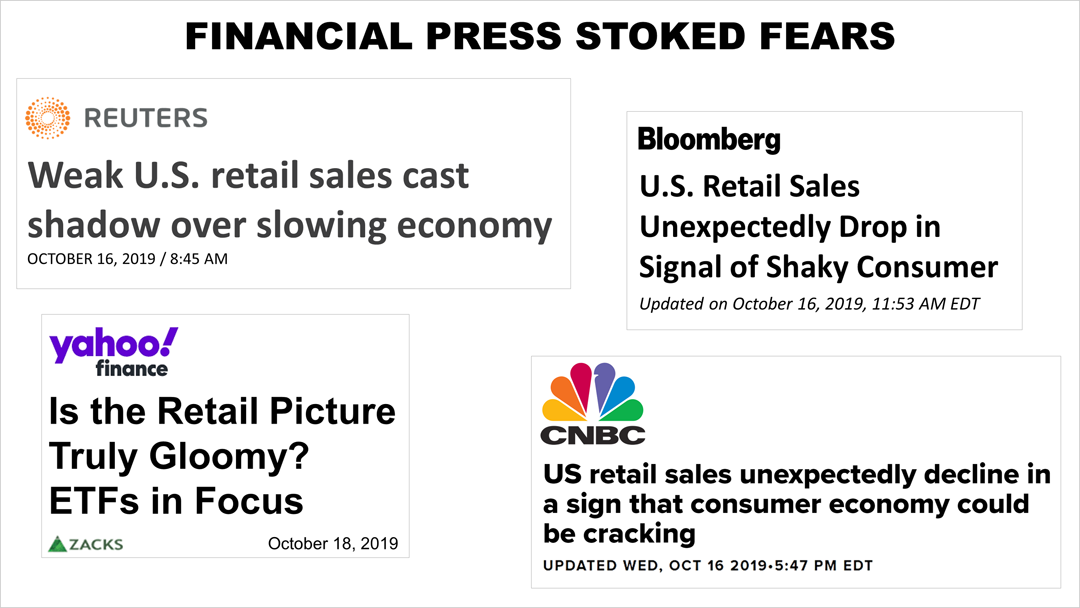 Retail sales — an important factor in consumer spending, which drives the U.S. economy — declined, according to newly released data from the Commerce Department, and it was followed by gloomy headlines about shaky consumers and seen as a sign that the economy could be cracking. Actually, the headlines illustrate the financial press' often myopic and narrow view of economic news. 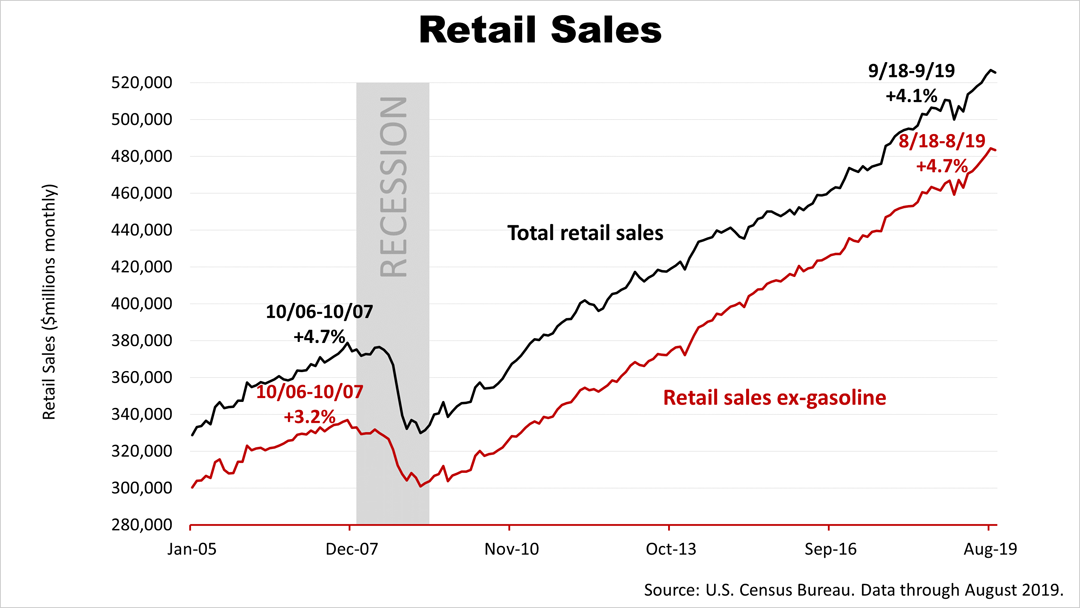 Sales at U.S. retailers fell three-tenths of 1% in September for the first time in seven months. That's a fact! But news services reported that it signaled that a widely expected slowdown in consumer spending might be underway, without telling consumers the full story, including these other facts:

Retail sales excluding gasoline, because its price volatility distorts the retail sales picture, rose +4.7% in the 12 months through September 30th. That was the same 12-month rate as August, and significantly higher than the +3.8% retail sales growth rate in July.


While the one-month decline is not good news, the 12-month rate is much more important in judging the trend. The retail sales numbers have a history of volatility month to month, and three ticks down in September does not fairly reflect what's happening. 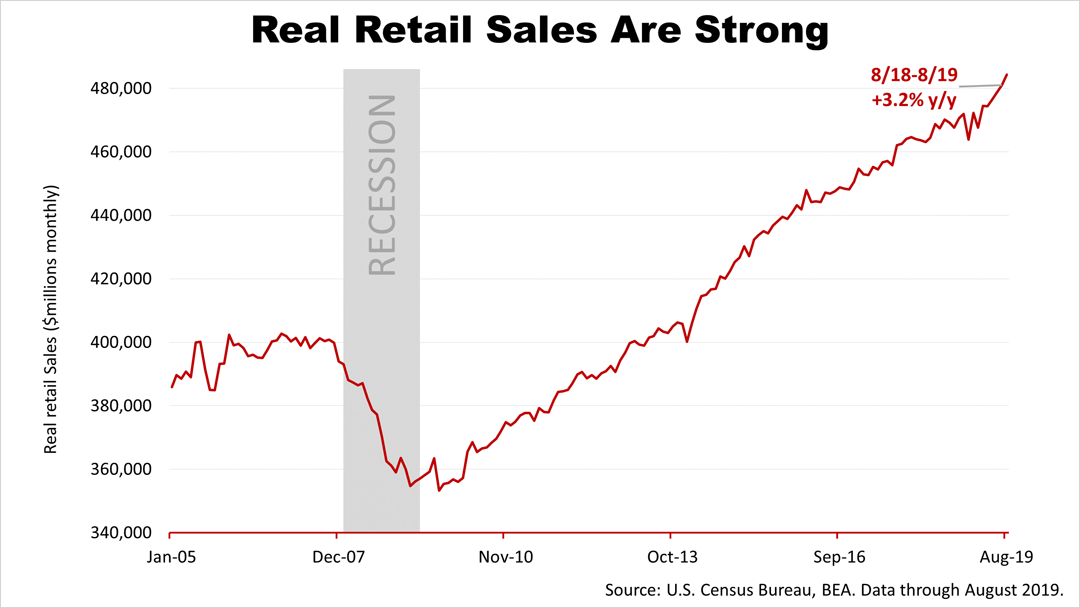 Moreover, real retail sales after inflation have actually been surging for many months. Real retail sales excluding gasoline in August were up +3.2% y/y, from +2.4%% y/y in July.


This figure is very strong by historical standards and it reflects the real consumer purchasing trend after inflation. 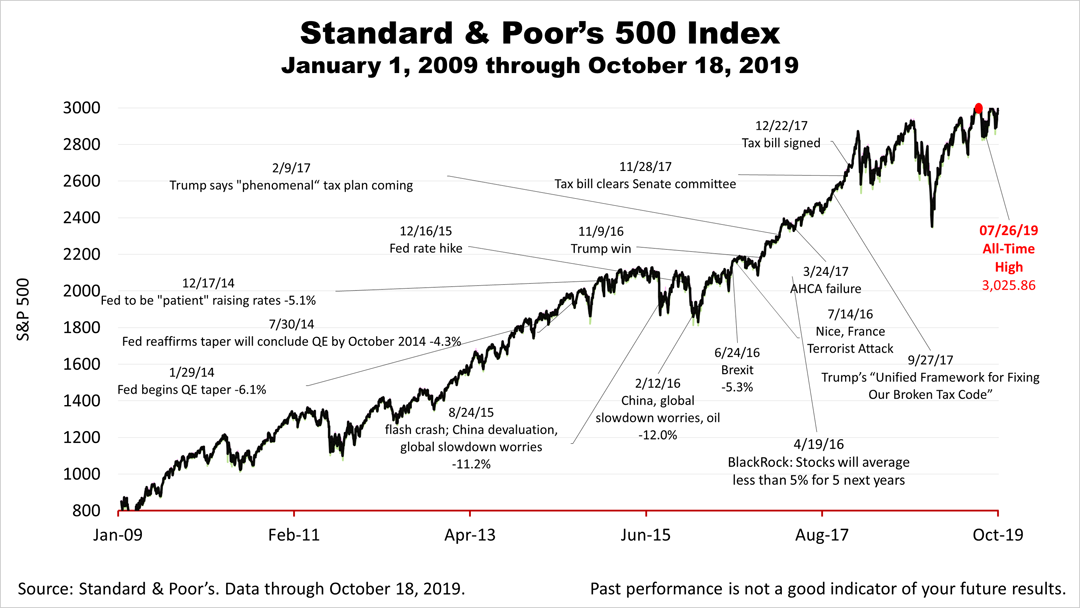 This article was written by a veteran financial journalist based on data compiled and analyzed by independent economist, Fritz Meyer. While these are sources we believe to be reliable, the information is not intended to be used as financial or tax advice without consulting a professional about your personal situation. Tax laws are subject to change. Indices are unmanaged and not available for direct investment. Investments with higher return potential carry greater risk for loss. No one can predict the future of the stock market or any investment, and past performance is never a guarantee of your future results.

This article was written by a professional financial journalist for Lumin Financial and is not intended as legal or investment advice.

Investment advisory services offered through Lumin Financial LLC, which is an independent Registered Investment Adviser. Information presented is for educational purposes only and does not intend to make an offer or solicitation for the sale or purchase of any securities. Investments involve risk and unless otherwise stated, are not guaranteed. Be sure to first consult with a qualified financial adviser and/or tax professional before implementing any strategy discussed on this site.